Trine had to give up one of her biggest dreams

“I have never seen Trine so happy as when we picked up her new dog, Friderika (Frikadellen). However, Trine had to admit already after a week that she could in no way take care of the new family member ”. 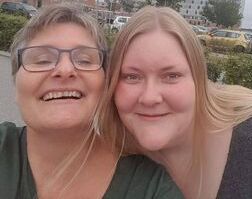 It is hard to have cancer in every way, and the treatment methods often have strong side effects that can affect the patient to a great extent. Trine experienced this when the effects of chemotherapy meant that she had to give up her dream of keeping a dog. Trine just managed to have her dog for one week, when she recognized that she was too tired and worn out to take care of the needs of others. However, Anja, Trine’s big sister, is happy that Trine made an attempt: “It was a huge defeat for Trine, but I’m so grateful she tried, so she did not go with the regretful ‘only if’ feeling’ the rest of the time ”.

Trine felt regret that she did not “lived enough” in the two years she was healthy before the cancer came back. In other words, she blamed herself and thought thoughts like, “Why didn’t I travel more? Why did I not live life more ?! ”

It’s hard for Anja to think back on because Trine lived her life believing that she still had plenty of years. The doctors had after all said several times that she should not fear relapse and that she was completely healthy.

Before Trine fell ill, she loved immersing herself in movies. She was an intelligent young woman who enjoyed escaping into the exciting big world of film.

But cancer made this impossible. Anja describes it as follows: “I experienced during the difficult periods that she could not do it, as the pain occupied all her thoughts and focus. She often could only sit down for short moments at a time due to pain ”.

Trine is no longer among us. But Anja is here and can tell her sister’s story.

At OvaCure, we greatly appreciate that Anja will share her story as a relative – and it confirms to us that we will need to gain more knowledge about ovarian cancer. That is why OvaCure is fighting for more research in the field.